Pushing your limits is a great way to improve. Join me on my first Fotomarathon, a 12 hours photography competition.

I participated in the 16th Fotomarathon in Berlin after reading about it in Synke’s blog. The rules are quite interesting: You get 12 hours to take 12 photos, fitting 12 given subjects. Photos must be taken in a specific order, no editing allowed. To make things even harder, the first picture has to include the starting number.

My brother registered as well and his girlfriend joined to keep company with us. As it turned out, she gladly volunteered to be part of some photos which both of us appreciated.

The lens manufacturer Tamron was the main partner of this year’s marathon. They brought a selection of lenses which one could use for the day – free of charge. I decided to try the 35mm F/1.8.

At 11am, the overall topic “Beyond limits” and the first four themes were announced. The crowd split up, the journey began. We decided to start the competition with a break. I took a few shots with the borrowed Tamron lens while having a coffee. Both were great. 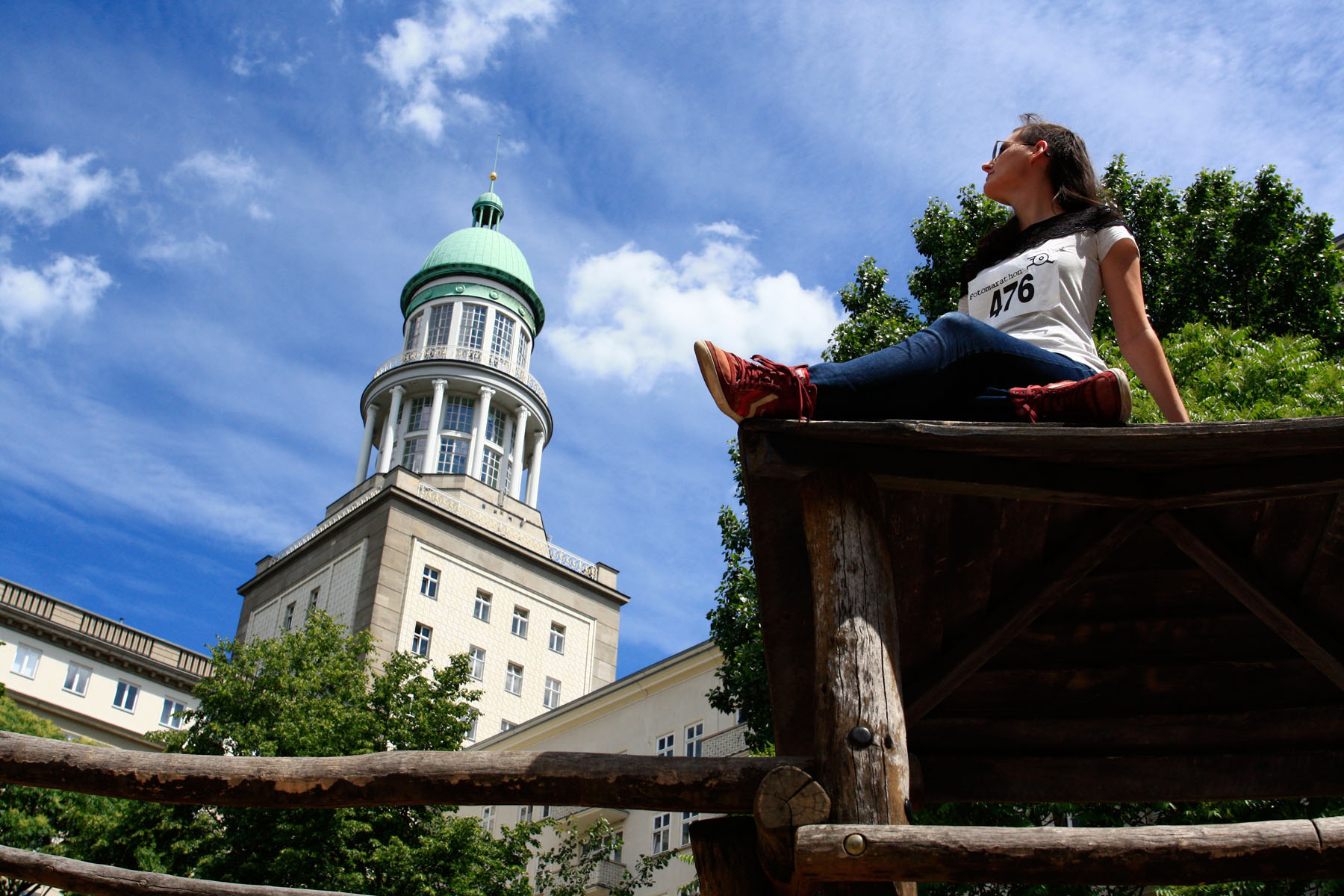 Near the starting point we found a playground and Sophie offered to pose on top of it. Admittedly, there are more creative ways to include the starting number. 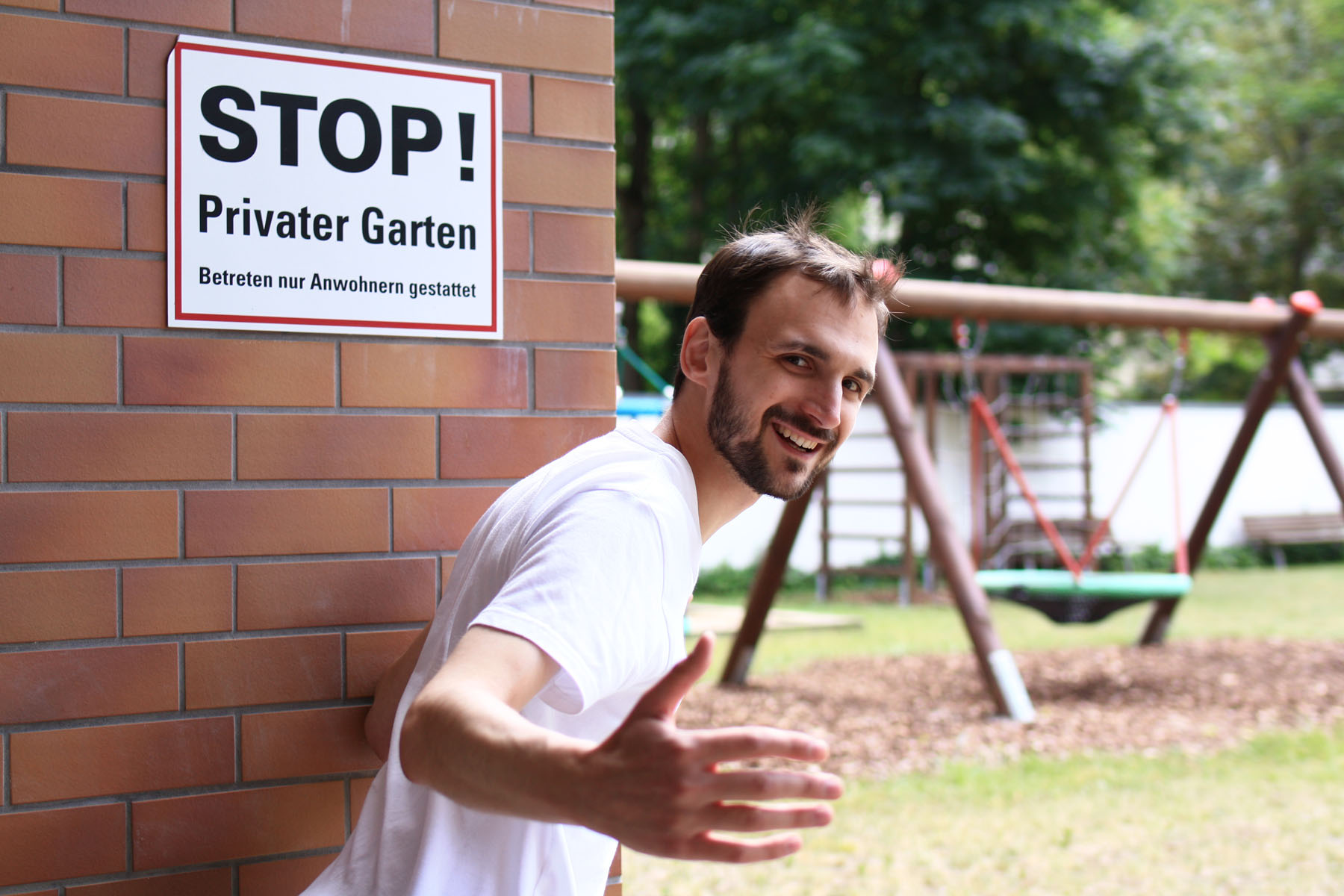 For this one, I didn’t want to go for the most obvious idea: A person walking past the Berlin border. Instead, we found this private garden. My brother is welcoming the viewer to cross the border and come inside. 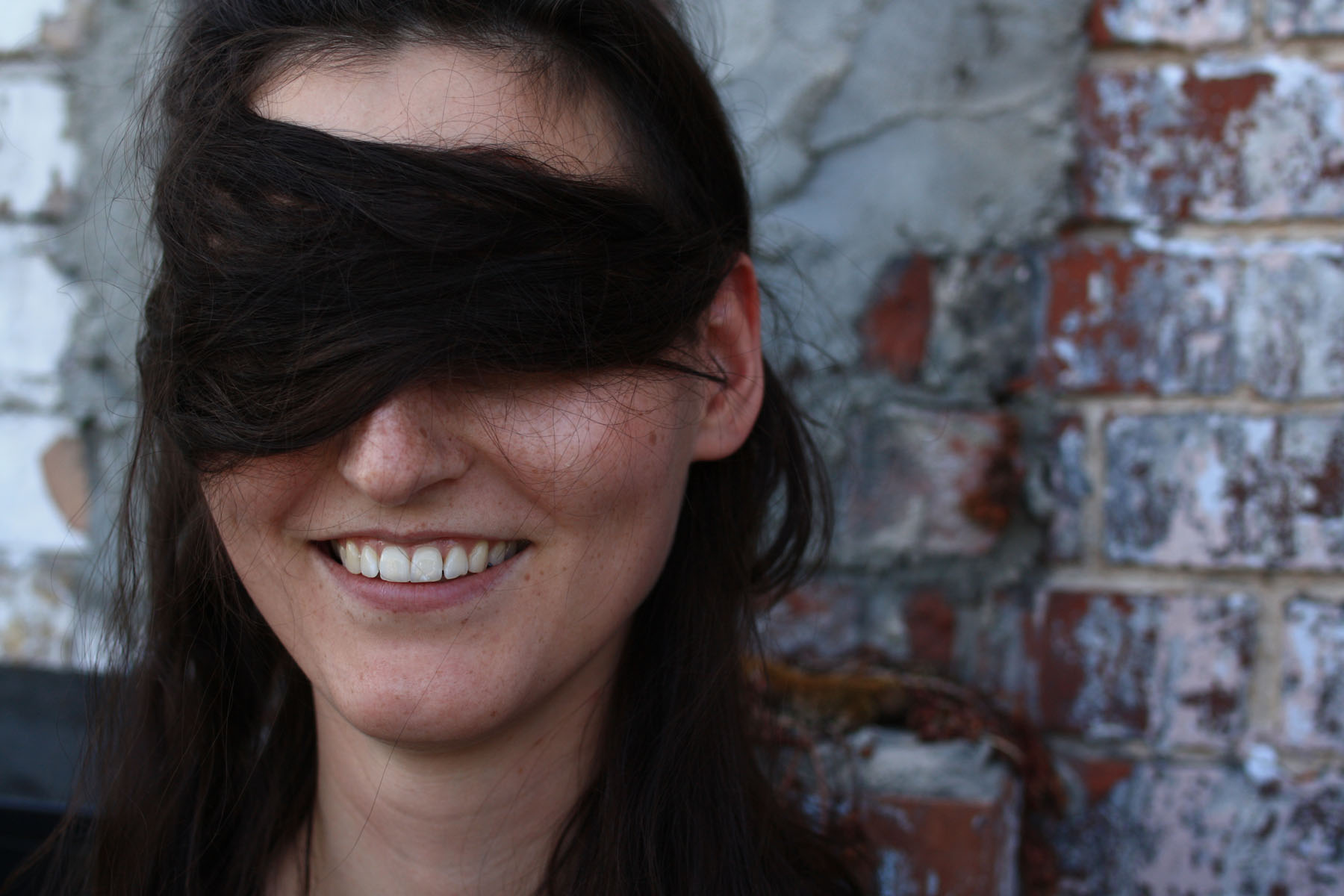 At 3pm, we arrived at the second station to collect the next four themes. While waiting, I took a few portraits of Sophie. Suddenly, one of us had the idea to cover the eyes with her hair. I focussed her teeth and was pleased with the blurred brick wall background. Third photo done. 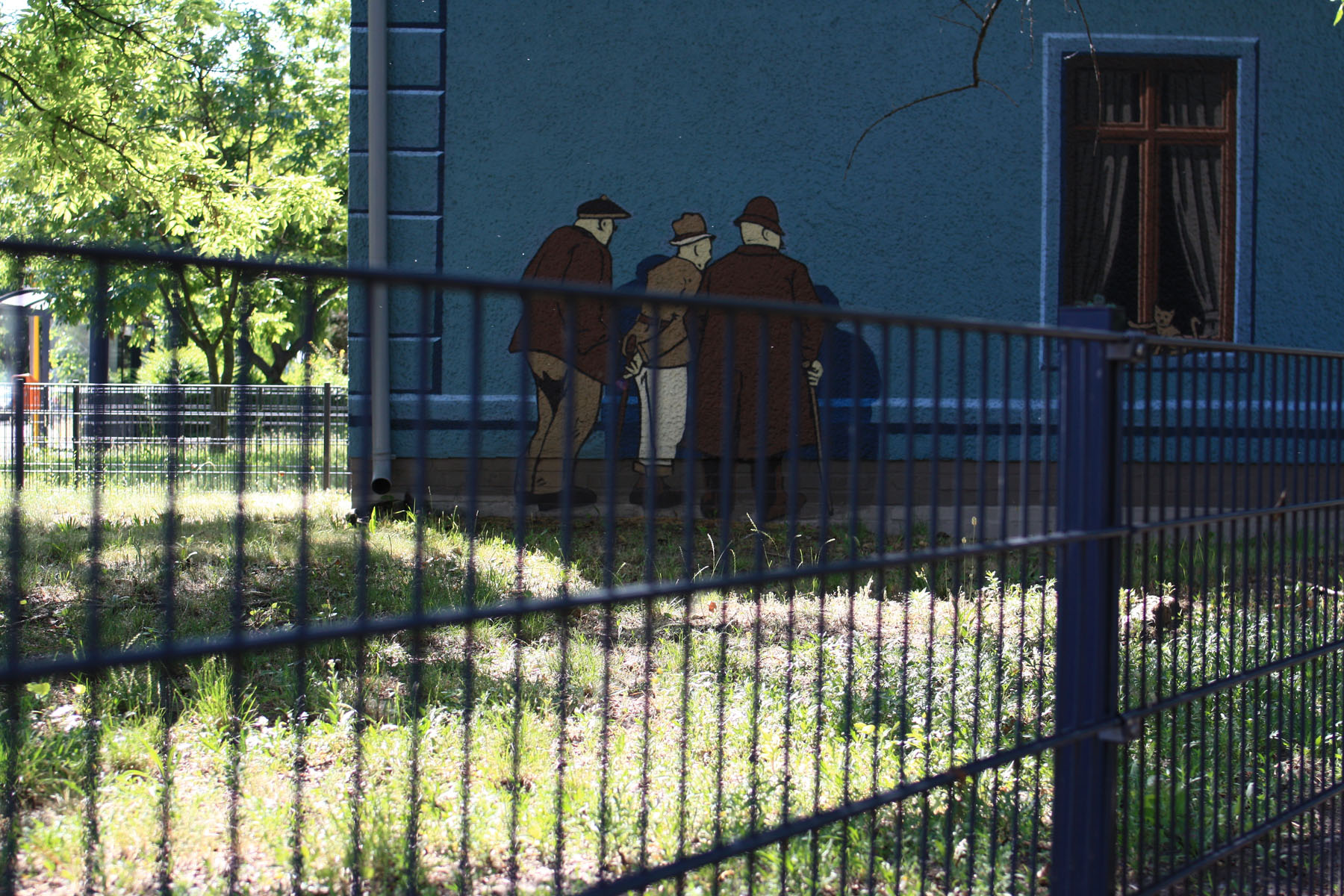 I was on my way to get a carsharing car when I found this building with a painted facade. I like that all men look in the same direction towards the window. 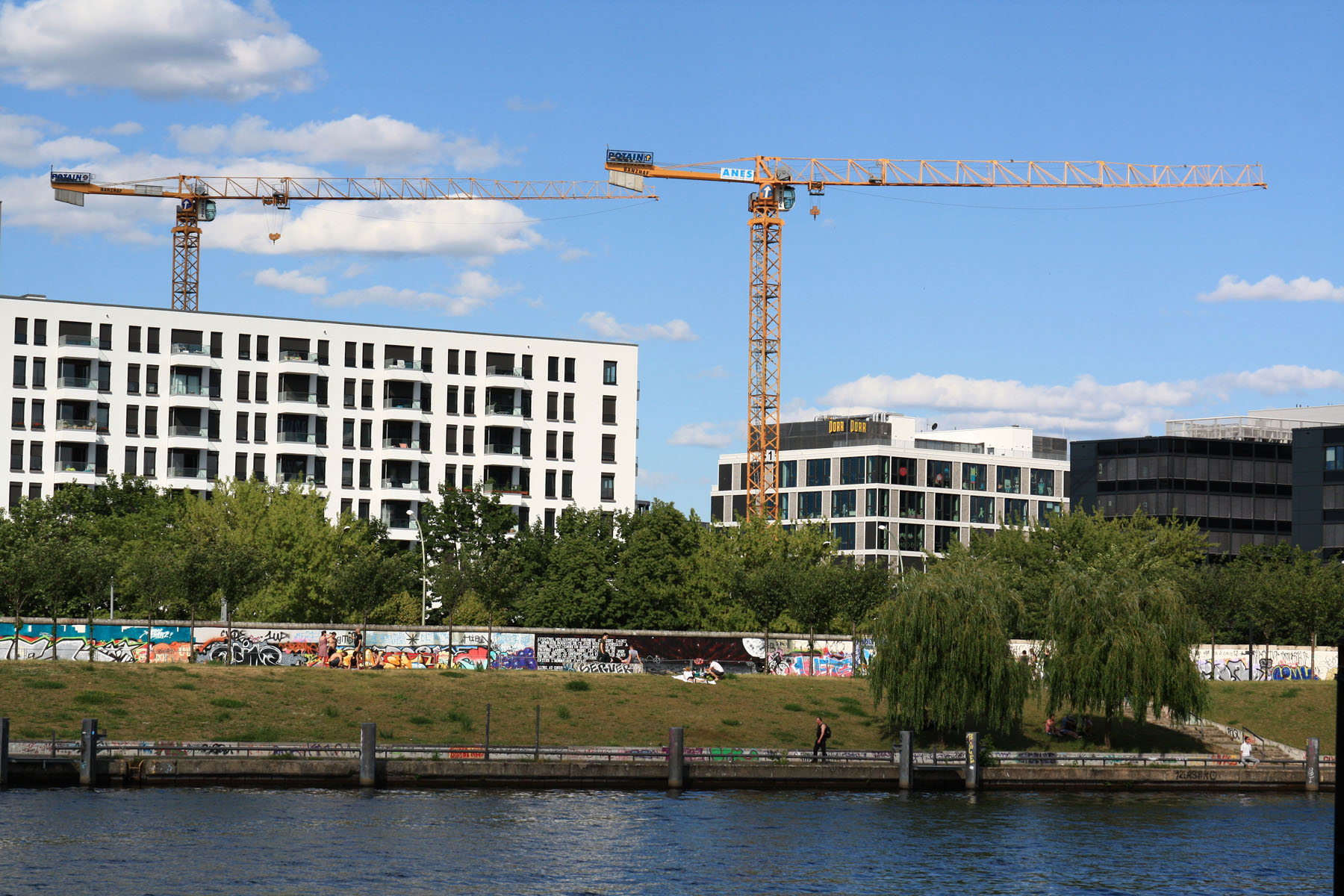 We took the car to get to Kreuzberg since it sounded like a good fit for the next themes. We noticed that we were somewhat behind. Catching up before arriving at the 7pm station was important to us, knowing that it will be pretty dark past 9:30pm.

When faced with these time limits, two cranes having the same angle was enough for me to be considered good neighbourship. 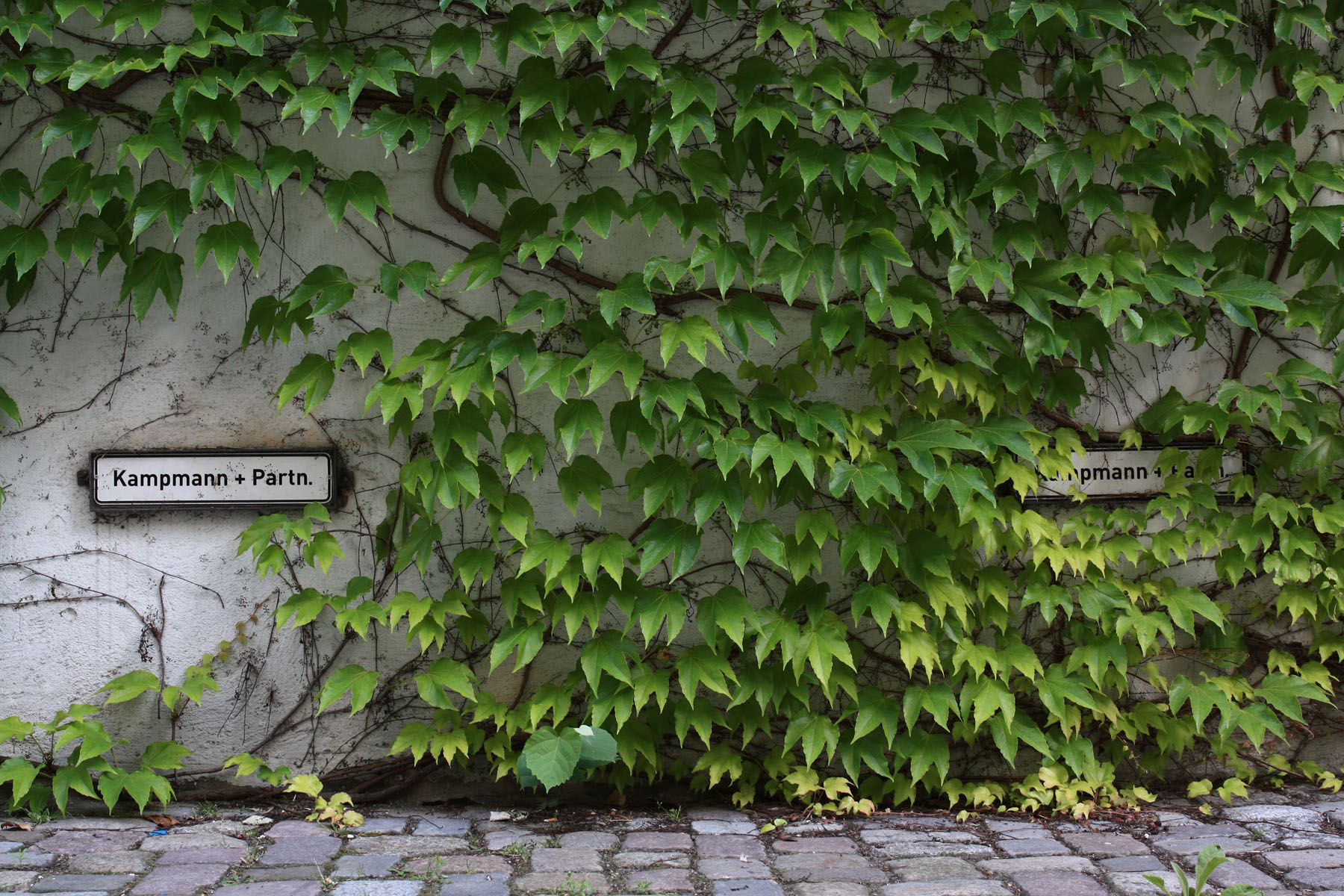 I walked into a backyard where i found these parking lots. Both reserved for “Kampmann + Partner”. I hope the jury is able to see this when looking at the 9x13cm prints they get. 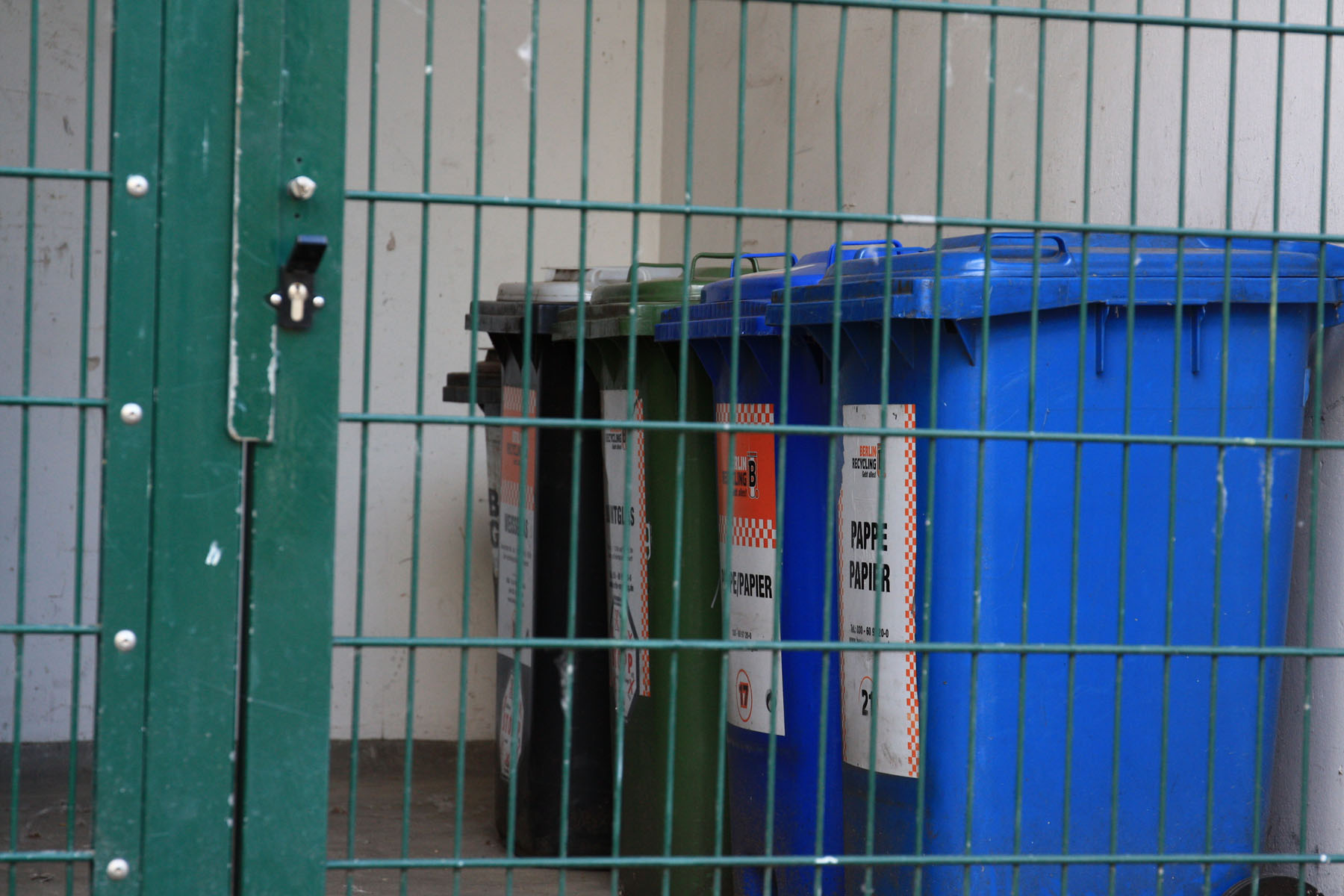 On the same backyard, I saw these trash cans. “Good enough”, I thought. I regretted the decision afterwards, but there was no time. Clearly the weakest photo in my series. 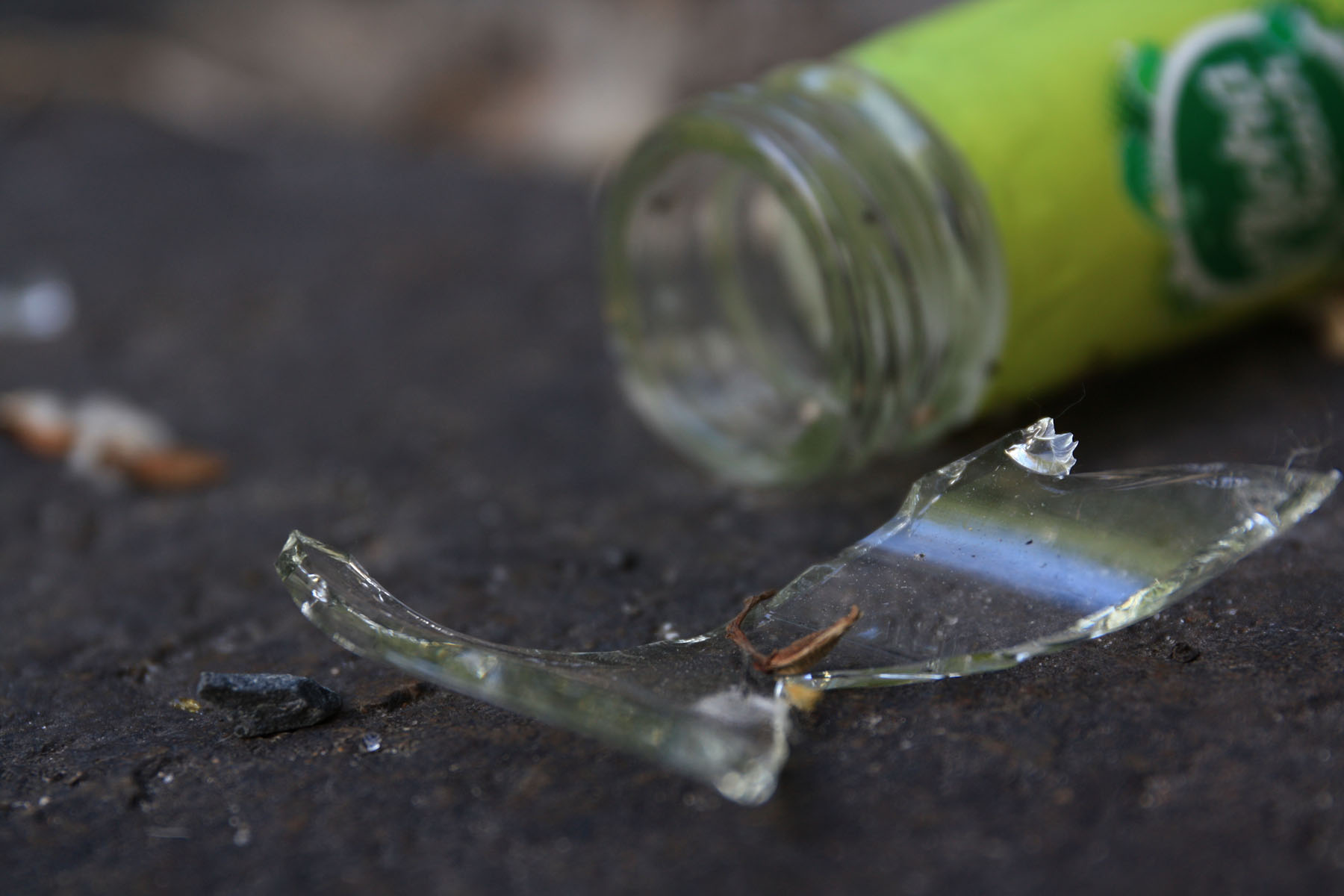 I found a cigarette on the floor. “Not kissing a smoker? Too cliché!” came to my mind. When I found this broken bottle next to it, I was glad that I had a macro lens in the bag. 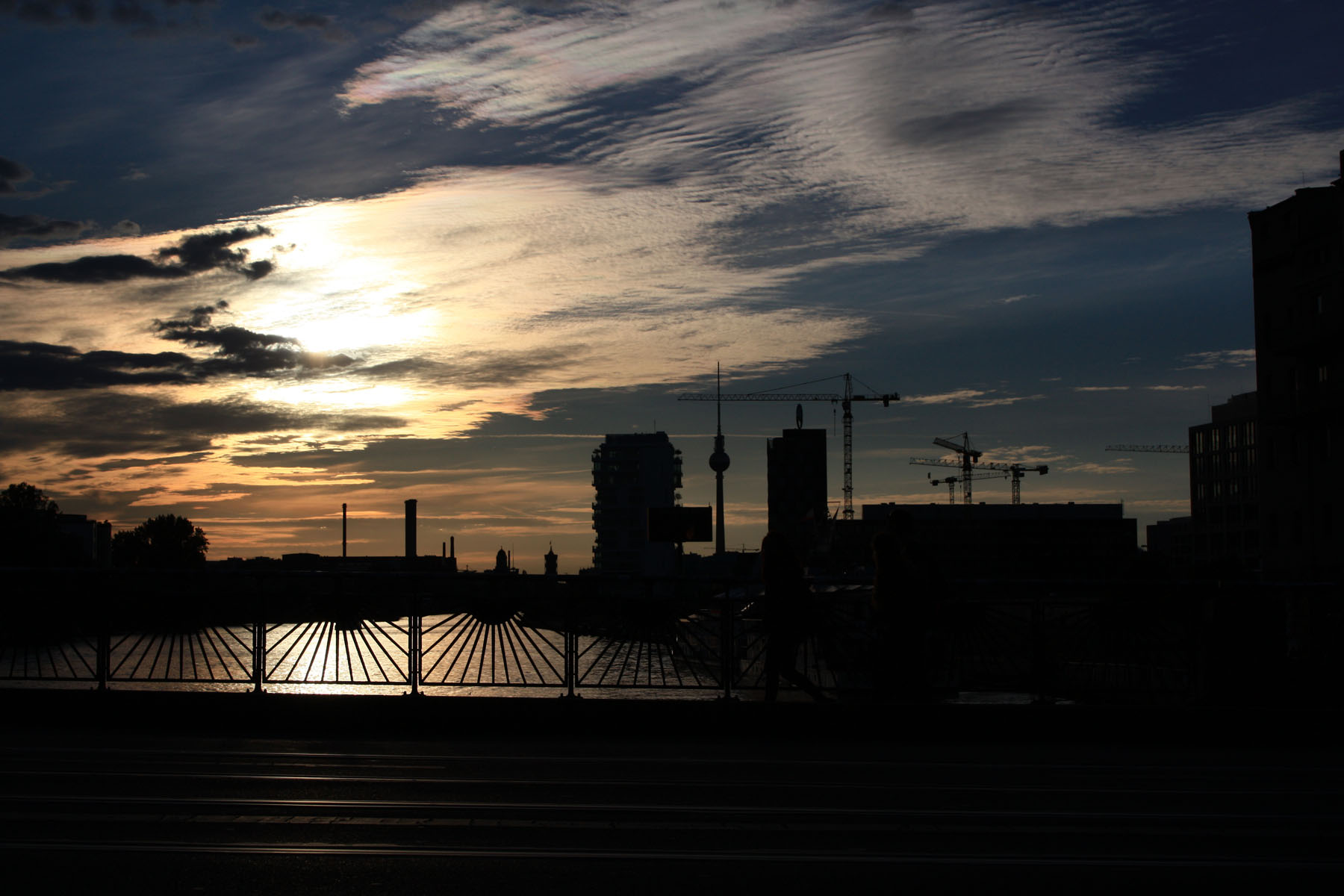 We got the last four themes in a beer garden at 7pm. I felt exhausted already. People around us were having a beer, watching the EM game between Wales and Slovakia. We decided to go back to Kreuzberg once again. When we crossed the Oberbaumbrücke, it appeared to be the perfect place. 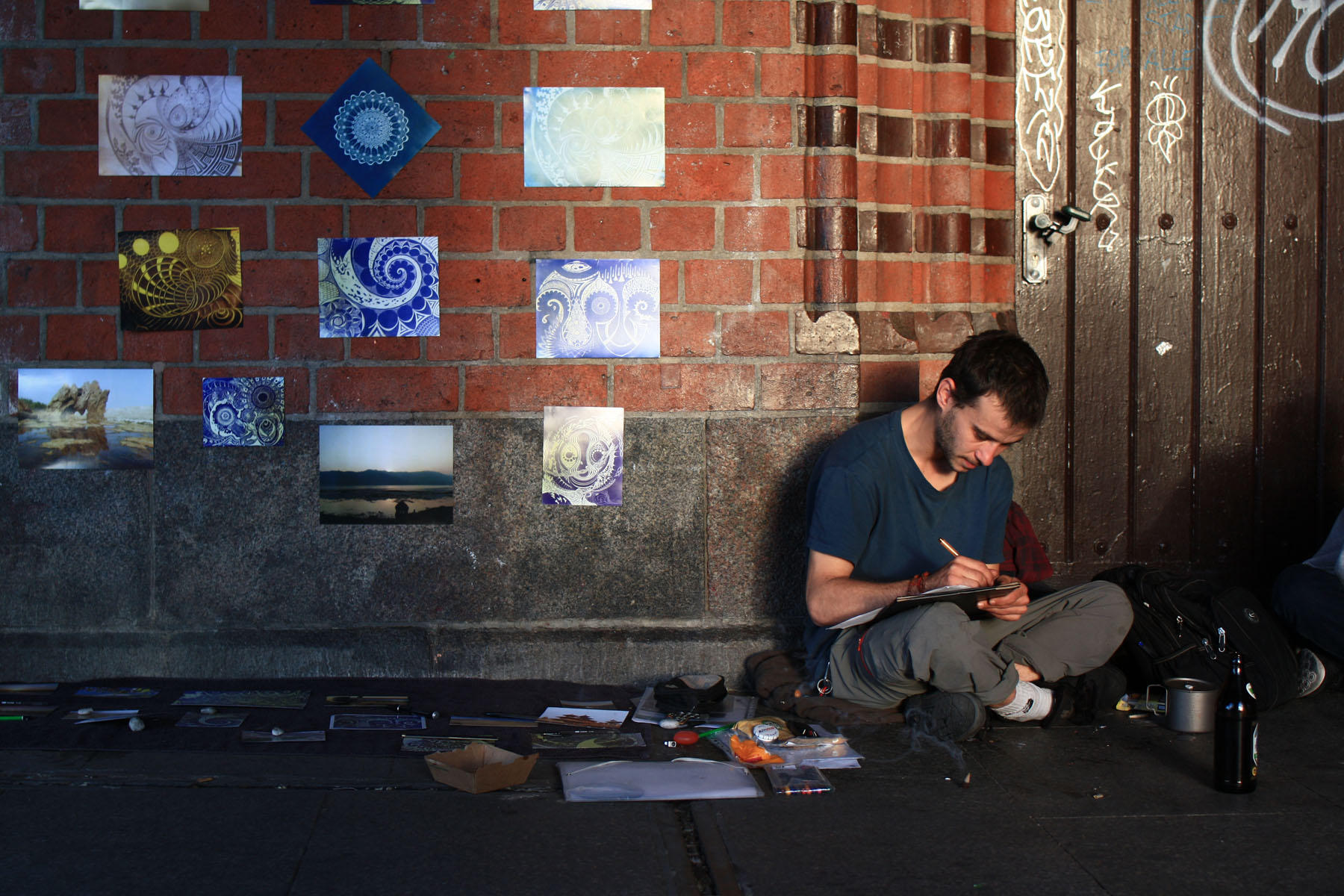 Turning around on the bridge, I saw a young drawing artist. He seemed to be in a different world, sitting on the bridge, absorbed in his art while enlightened by the setting sun. 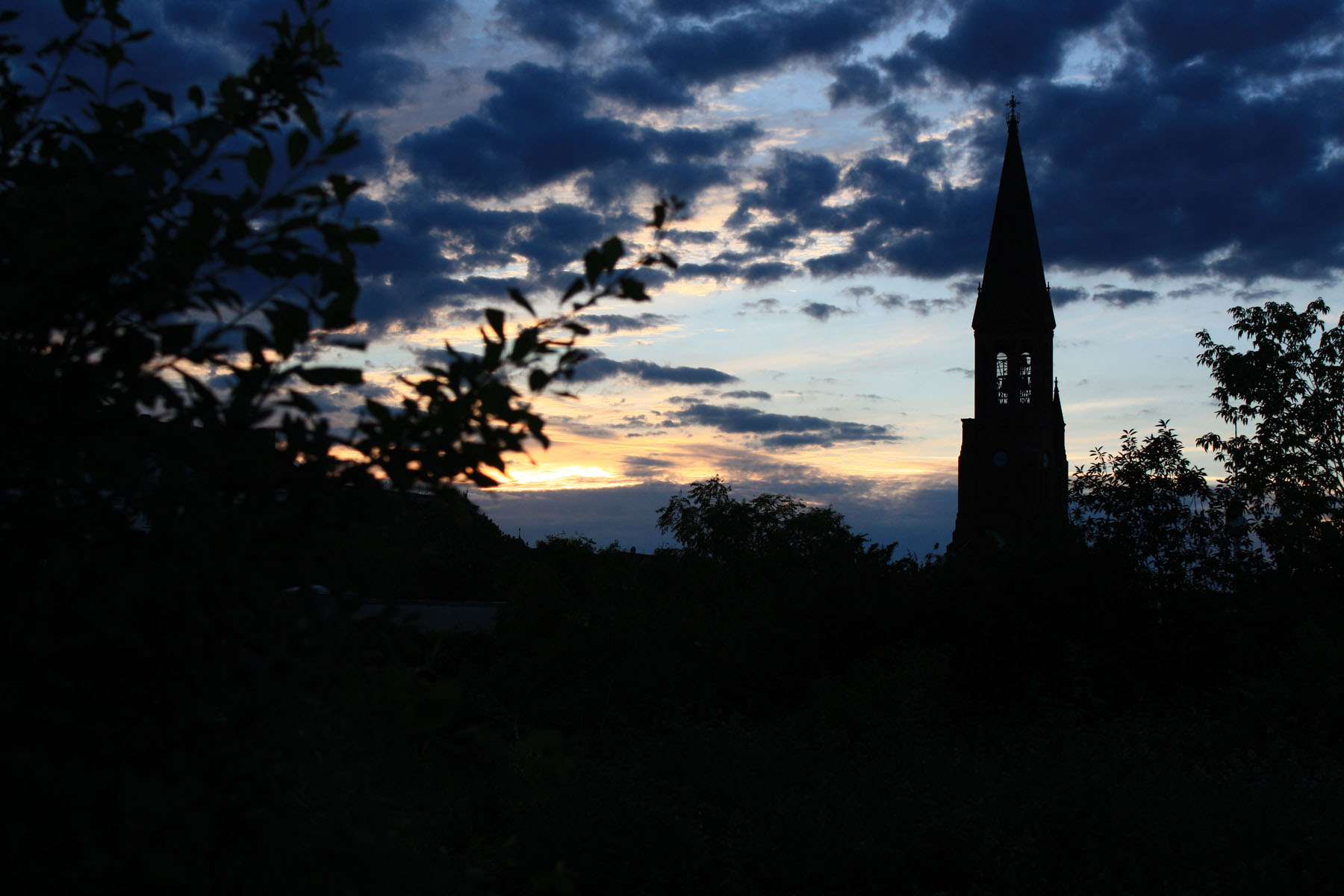 Time passed and it got steadily darker. From the hill in Görlitzer Park I had a good view of the Emmaus church. If you are religious, you may associate God with “The end of the world”, life and death, beginning and end.

I wish I had a wide angle lens to get more of the beautiful sky with its dark clouds. 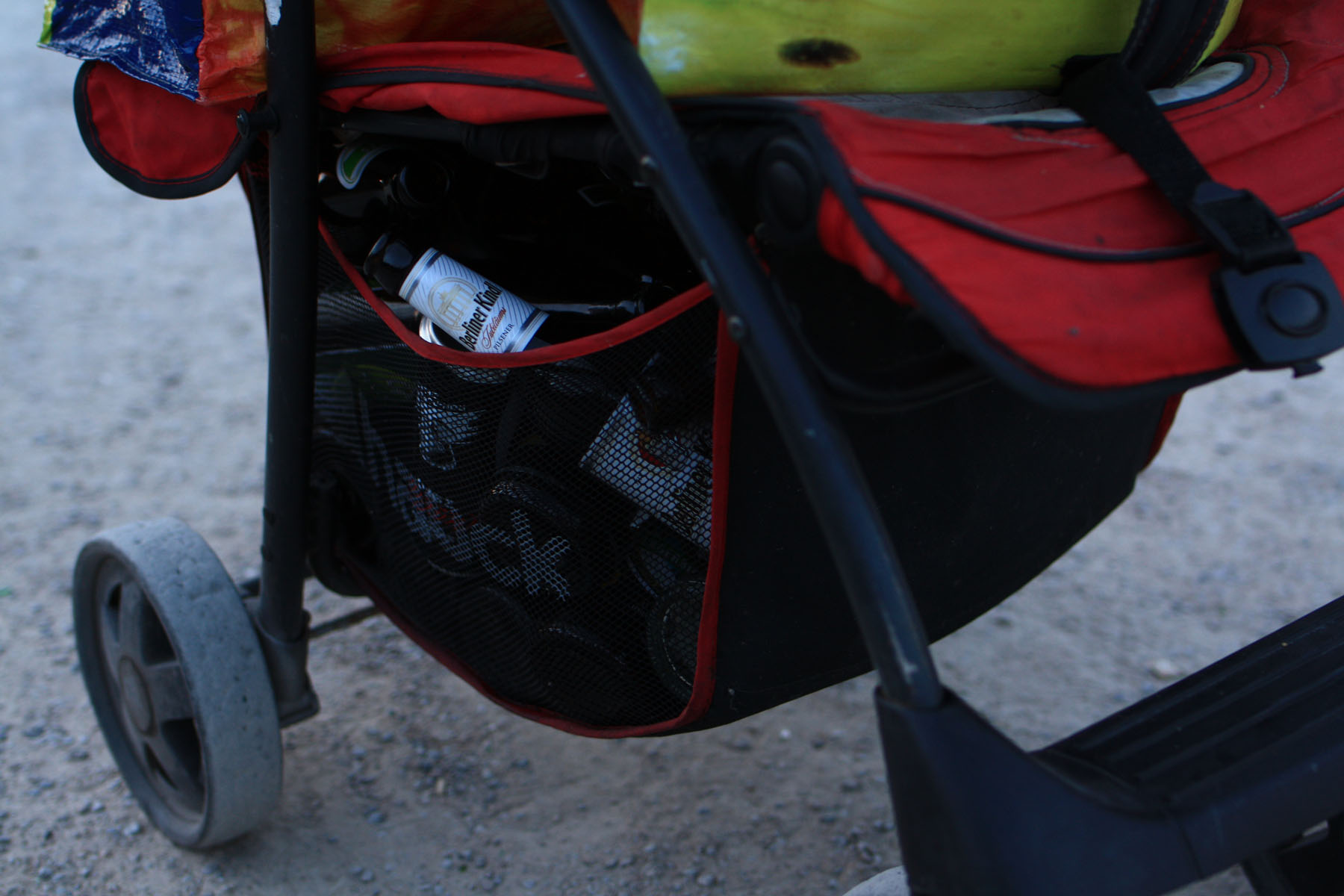 I got really lucky here. We were pondering over this theme some time already when I stumbled accross this buggy. I can imagine the child saying “Mom, there are limits!” when seing how she is using his vehicle.

We went to the final station and submitted the competition photos. I felt very tired but a cold beer gave back some energy. Sitting at the fire, we chatted with competitors and saw their pictures. It’s nice how everybody has different interpretations of the given themes. I’ll certainly participate again next year.

And now, I invite you to look at my brother’s photo series. Even though we were doing the marathon together, his series looks very different.